HOSETTA LEARNED, THE HARD WAY, GOD IS A FAITHFUL GOD 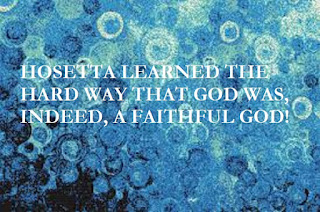 HOSETTA: REMAINING FAITHFUL TO GOD AND THE ADULTERER

When Hosetta married George, it was the mid-80s  and they had a religious ceremony. She was excited that she was marrying a man from the Christian faith like herself.

For her, it meant, they would denounce any other religion, accept Christianity. And the relationship, between George and Hosetta, would, eventually, grow to reflect God’s relationship with his people.

Their marriage DID grow to reflect God’s relationship with his people, but NOT in the way Hosetta had imagined.

In God’s relationship with his people he is ALWAYS faithful, but his people can, willingly, CHOOSE to be unfaithful and wayward.

George became a wayward husband and his addiction made him a chronic adulterer.

Adultery is not simply about someone cheating. Adultery is about a married person, who is “one flesh” with another, having sexual intercourse with a third party other  than their spouse, which “defiles” the SACRED marital relationship.

The defilement of adultery is the way the marriage is MADE impure, which is usually through sexual impurity.

The bible says not to even “keep” company with a brother or sister in-the-Lord who is an adulterer (1 Corinthians 5:11).

The bible also says that “out of the heart” come “evil thoughts,” such as adulteries, and this kind of act defiles a man or woman (Matthew 15:18-20).

In the Old Testament there were ways people could CLEAN themselves from acts of defilement.

Back in the day, acts of defilement would separate a person from God’s SACRED people, and his SACRED dwelling place (the temple).

If a person had defiled themselves and still went into God’s SACRED dwelling, their uncleanness would desecrate the temple.

Prayers or any other homage to God, the Holy Spirit would not be accepted, from a defiled person, without, first, being cleanse from their defilement.

In the New Testament if a person is cleanse, by the blood, but commits acts of defilement, they have willingly chosen to desecrate the temple of the Holy Spirit (the body).

Adultery defiles, but the ongoing practice of adultery is a witness to what an  individual treasures more than God and most likely, more than their spouse.

When Hosetta realized George had all the tools, he needed to overcome his addiction - doctors, psychiatrists, counselors, SAA groups, her, God, the indwelling Holy Spirit, and his POWERFUL word – she knew he treasured his sexual addiction more. And his heart became devoted to what he treasured (Matthew 6:21).

George didn’t have to choose to walk in the adultery that continually defiled him and their life together, but HE DID.  God loved George and he relentlessly pursued his heart, but George kept doing what HE WANTED to do.

George professed to be redeemed their WHOLE marriage. Thus, he would have had the indwelling Holy Spirit’s power, within him, the WHOLE marriage, to enable him to CHOOSE righteous living by FAITH (trusting in and depending upon God).

George would have been freed from sin. If he’d confessed his sins, received God forgiveness, allowed God to cleanse him, and empower him to turn (repent) from his adulteries; God had promised to help him do it. “…He helps me…” (Psalms 28:7 NLT). “…The Lord who made you and helps you says: Do not be afraid …my servant …my chosen one…” (Isaiah 44:2 NLT). “… The Holy Spirit helps us in our weakness…” (Romans 8:26 NLT). “…You are my helper and my savior…” (Psalms 40:17 NLT).

George was an ethical man, without spiritual fruit, who had one foot in the marriage and the other foot in the world of sexual addiction. She couldn’t always see, clearly, the impact his defilement had on their life.

In hindsight, what she learned about ethical behavior, is that it makes you FOCUS on what a person “does” MORE than “who” they are within.

When George was at home with his family he was ethical and it made her question the things she did see that were unethical. How could George DO the right thing and not BE the right thing? “…Ye shall know [God’s people]… by their fruits…” (Matthew 7:16 KJV).

While she was simply observing some of George’s unethical behaviors as they impacted their lives together; George was actually, in the world of sexual impurity, engaging, participating, and practicing unethical behavior.

George attempted to serve (attend to) God, her, Oscar, and his addiction. The bible distinctly says “NO MAN” can serve two masters, (something/one that demands/requires your utmost loyalty), but eventually he (she) will HATE one and LOVE the other or they will be DEVOTED to one and DEPISE the other.

There was NO WAY George could go on and on trying to attend to God, his marriage, his family and his addiction without eventually having to choose one over the other.

He, especially, couldn’t continue to be in a covenant relationship with God, the Holy Spirit while being and choosing to remain ENSLAVED to sexual impurity.

He, also, couldn’t continue to be in a covenant marriage with Hosetta, either, while choosing to remain ENSLAVED to his “other” life.

Ethical behavior doesn’t produce a righteous heart of devotion toward God or toward those you love. The bible say people pay God lip-service, but “their hearts” are far from him. “…This people honoureth me with their lips, but their heart is far from me” (Mark 7:6 KJV).

George was GOOD at offering her FALSE CHARM (behaviors, which would make her think he’s  being emotionally engaging). George gave her attention, cooperated with her, and did kind gestures. In these moments, he would throw her a compliment or two, bring her gifts, do things he knew she would enjoy, and focus on pulling her emotions toward him.

Once George would pull her emotions toward him, he would STOP his FALSE CHARM and go back to his illusive self.

Hosetta, would then, find herself chasing after George’s heart again, but it kept getting farther and farther away from her.

George SAID and DID many ethical and charming things to keep her heart drawn to him, while purposely keeping his far from her. George was good at sucking her in over and over again.

Hosetta would fall for it every time and it would make her IGNORE everything he’d done to break her heart and abuse her emotions.

She loved him and she would allow herself to be fooled by his FALSE CHARM knowing it was a bunch of BULL. It felt GOOD, for the moment, and his FALSE CHARM was sometimes better than nothing at all. Plus, deep inside, a part of her, wanted it to be true, even she it probably wasn’t.

When she’d fall for his false charm, she’d only ended up hurt again, especially when he would abruptly stop. She invested so much in her relationship with George, but he was often careless with her heart and emotions. Had the whole relationship been a waste?

Hosetta yo-yo-ed between submitting to his FALSE CHARM and being hurt by them. Hosetta found herself trying, with everything she had, to do things to please him, just to be told she was still falling short as a woman and a wife Always 99 ½.

Wanting sincere love and affection, from George was dangerous to her heart and her emotional health. Eventually Hosetta knew NOT to want or be dependent on him for NOTHING, especially things, such as love and affection. Even though she had a right to expect those things as his covenant wife.

Hosetta, got to the point, where she didn’t want to be helpless, needy, or vulnerable to George in anyway. If George SAW she wanted “something” from him, it would come with a price tag.

It happened slowly, but it began to dawn on Hosetta, George didn’t love her. He didn’t care how she felt and he certainly didn’t care how his behavior was damaging her life or Oscar’s.

Hosetta married George in order to spend her life with him and deepen their bond. But his heart slowly drifted in another direction. His attempt to cleave to her was lost to the master that his heart was truly cleaved to.

The treasures that sexual impurity offered George held the riches he desired and longed for with ALL his heart.

In hindsight, Hosetta knew she could be the best and most kind-hearted wife in the world. She could blow his mind sexually. She could intrigue him with all her accolades, bells and whistles. She could have physical beauty that stopped traffic, but she could NOT compete with the power of George’s human will. .“… They kept doing whatever they wanted, following the stubborn desires of their evil hearts...” (Jeremiah 7:24 NLT).

George’s relationship to his sexual addiction held an attraction to him that made him serve it wholeheartedly.

It was the object of his devotion and it seemed to constantly fill his heart, inform his thoughts, and demand his behavior.

His addiction lead him away from their marriage and lead him to forsake the sacredness of it.

George took on the sinful characteristics of a chronic adultery. In private, behind closed doors, she was experiencing him as dishonest, narcissistic, intimately shallow, emotionally inept and unsafe, unapologetic, entitled, projecting blame, and living in denial. She also thought he acted ethically justified (if he DID right; he WAS right, but he didn’t have to BE right).

Hosetta was often concerned that if George continued to worship at the altar of adultery and didn’t repent, the marriage would eventually be destroyed. “… ONE sinner destroy[ed]… MUCH GOOD…” (Ecclesiastes 9:18 NASB). It was on its way.

Why had God given her a husband like George? The Holy Spirit told her why. “...How can you know ME unless you share in my suffering?...” Hosetta wanted to “know” God, not just “know about” him.

That had been her prayer for years. “I want to know Christ--yes, to know the power of his resurrection and participation in his sufferings, becoming like him in his death…”(Philippians 3:10 NIV).

Her prayer to “know” God was a costly request. The old saints always said: “...be careful what you ask for...” “…The faithful followers of the Lord … keep their promises even when it hurts…” (Psalm 15:4 NLT).

“Herein is love, not that we loved God, but that he loved us and sent His Son to be the propitiation (substitute, intervention) for our sins.” (1 John 4:10 KJV).

Hosetta’s heart was unhappy over George’s constant betrayal and she felt every bit of that betrayal. But God’s people betrayed his heart, all the time, especially those who have turned their backs on him. “…thou hast gone a whoring after the heathen, and …art polluted with their idols…” (Ezekiel 23:30). “…They ABANDONED the Lord… they turned their backs on him….” (2 Chronicles 29:6 NLT).

“… [YOU]… FORGOT all about ME,” says the Lord…” “…Does a young woman forget her jewelry, or a bride her wedding dress? Yet for years on end my people have FORGOTten ME…” (Jeremiah 2:32 NLT).

Hosetta’s calling was to be a “...mouthpiece for God’s heart...” by becoming an, experiential, WITNESS to God’s FAITHFUL love for a WAYWARD people. “...you will be my witnesses, telling people about me everywhere (through speech, lifestyle, and CONDUCT)...” (ACTS 1:8 NLT).

BUT, “…My people would not listen to me. They kept doing whatever they wanted, following the stubborn desires of their evil hearts. They went backward instead of forward” (Jeremiah 7:24 NLT).  “…The people replied, “Don’t waste your breath. We will continue to live as we want to, stubbornly following our own evil desires” (JEREMIAH 18:12 NLT).

“…Because sentence against an evil work is not executed speedily (the adulterer “seem” to be flourishing, but are not. They are, however, being given an opportunity to get right with God) …[nonetheless]...the HEART of the sons of men (the heart of the adulterer) is fully set in them to do evil [instead of repenting]….” (Ecclesiastes 8:11 KJV).


Posted by Dr PENSACOLA H. JEFFERSON at 7:28 AM