THE USHER HELPS YOU ENTER HIS GATES "ONLY"ON SUNDAY! 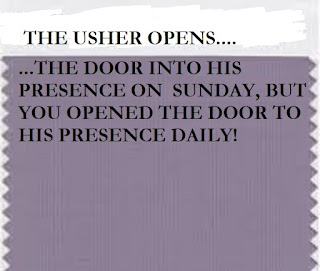 The gatekeeper is a person who GUARDS or CONTROLS the access or entrance to something or someplace. The gatekeeper also supervises, monitors, or oversees the traffic, or flow of people or information, or the actions of others, or the passage into the gateway.

They are GUARDIANS, CUSTODIANS, WATCHMEN, PROTECTORS, LOOKOUTS, USHERS, CARETAKERS, PATROLERS, WARDENS, SENTINELS, OR KEEPERS OF THE GATE or DOOR, or ENTRANCE.

Gatekeepers, like modern-day ushers, also guarded the entrance to the temple.  “…He stationed the gatekeepers of the house of the Lord, so that no one would enter who was in any way unclean…” (2 Chronicles 23:19 NASB). “…The four chief gatekeepers who were Levites, were …over the treasuries in the house of God…” (1 Chronicles 9:26 NASB). “…Mattaniah, Bakbukiah, Obadiah, Meshullam, Talmon and Akkub were gatekeepers keeping watch at the storehouses of the gates…” (Nehemiah 12:25 NASB).

Gatekeepers were so important that whole Levite clans, families, or tribes were assigned to the duties of the office and were active participants at the gates. “…These are the divisions of the gatekeepers: From the Korahites …The sons of Obed-edom, also gatekeepers, …God had richly blessed Obed-edom. Obed-edom’s son Shemaiah had sons with great ability who earned positions of great authority in the clan. ….All of these descendants of Obed-edom, including their sons and grandsons—sixty-two of them in all—were very capable men, well qualified for their work. Meshelemiah’s eighteen sons and relatives were also very capable men…Hosah’s sons and relatives, who served as gatekeepers, numbered thirteen in all. These divisions of the gatekeepers were named for their family leaders, and like the other Levites, they served at the house of the Lord. They were assigned by families for guard duty at the various gates, without regard to age or training, for it was all decided by means of sacred lots. The responsibility for the east gate went to Meshelemiah and his group. The north gate was assigned to his son Zechariah, a man of unusual wisdom. The south gate went to Obed-edom, and his sons were put in charge of the storehouse. Shuppim and Hosah were assigned the west gate and the gateway leading up to the Temple. Guard duties were divided evenly.  Six Levites were assigned each day to the east gate, four to the north gate, four to the south gate, and two pairs at the storehouse. Six were assigned each day to the west gate, four to the gateway leading up to the Temple, and two to the courtyard. These were the divisions of the gatekeepers from the clans of Korah and Merari…” (1 Chronicles 26:1-19 NASB).

“…They and their sons had charge of the gates of the house of the Lord, even the house of the tent, as guards. The gatekeepers were on the four sides, to the east, west, north and south…” (1 Chronicles 9:23-24 NASB).

Gatekeepers are the same as doorkeepers, porters, watchmen, or ushers. This book is basically viewing the gatekeeper as synonymous to the ushers of today and will be using the two words interchangeably.

Therefore, I am writing about and dedicating this book to USHERS!!

A gatekeeper or usher is a person who watches at the entrance of the “house of God” to open or shut, or monitor, or keep order at the entry or portal.

One of the main duties of the gatekeeper or usher is to OPEN the door, or OPEN the GATE, or OPEN the way and maintain reverence or order.

In the Old Testaments there were all kinds of gates. Gatekeepers were mostly GUARDS, but they had to be trustworthy, alert, and extremely watchful. “…Now the gatekeepers were Shallum and Akkub and Talmon and Ahiman and their relatives (Shallum the chief being stationed until now at the king’s gate to the east). These were the gatekeepers for the camp of the sons of Levi. Shallum the son of Kore, the son of Ebiasaph, the son of Korah, and his relatives of his father’s house, the Korahites, were over the work of the service, keepers of the thresholds of the tent; and their fathers had been over the camp of the Lord, keepers of the entrance. Phinehas the son of Eleazar was ruler over them previously, and the Lord was with him.  Zechariah the son of Meshelemiah was gatekeeper of the entrance of the tent of meeting. All these who were chosen to be gatekeepers at the thresholds were 212. These were enrolled by genealogy in their villages, whom David and Samuel the seer appointed in their office of trust…” (1 Chronicles 9:17-22 NASB).

Once, two hundred and twelve gatekeepers were chosen and ordained; they were in an “office of trust.” (1 Chronicles 9:22).

Some of the first people assigned to the new wall GATES, Nehemiah had built, were gatekeepers (Nehemiah 7:1). “..Now when the wall was rebuilt ….I …set up the doors, and the gatekeepers  …” (Nehemiah 7:1-3 NASB).

Gatekeepers were stationed at the entrance BEFORE a city was even open to public access or a temple was open for service. “…The gatekeepers, Akkub, Talmon and their brethren who kept watch at the gates, were 172…” (Nehemiah 11:19 NASB).

Gatekeepers were an active and prominent part of the temple staff. They guarded ALL the rooms, the valuables in the rooms, and had all the keys (1 Chronicles 9:26; Nehemiah 12:47).

At one time in history, gatekeepers were the ONLY way into the sacred place; like Jesus. “…There is no other name (WAY) under heaven given to mankind by which we must be saved…” (Acts 4:12 NIV).

Going through the gatekeeper was the ONLY way into the GATE and the temple/church. “…I do my share on behalf of His body, which is the church…” (Colossians 1:24 NASB).

Today’s temple/church is not the building, but the people. “…Your body is the temple of the Holy Ghost which is in you…” (1 Corinthians 6:19 KJV).

Back in the day, only thieves, robbers, wolves, lairs, and fakes tried to SNEAK into the GATES illegally. “…I tell you the truth, anyone who sneaks over the wall of a sheepfold, rather than going through the gate, must surely be a thief and a robber! But the one who enters through the gate is the shepherd of the sheep. The gatekeeper opens the gate for him, and the sheep recognize his voice and come to him. He calls his own sheep by name and leads them out. After he has gathered his own flock, he walks ahead of them, and they follow him because they know his voice. They won’t follow a stranger; they will run from him because they don’t know his voice.” Those who heard Jesus use this illustration didn’t understand what he meant, so he explained it to them: “I tell you the truth, I am the gate for the sheep. All who came before me were thieves and robbers. But the true sheep did not listen to them. Yes, I am the gate. Those who come in through me will be saved....” (John 10:1-10 NASB).

The parable, above, is about the shepherd and the sheep. It is used figuratively to represent Christ’s relationship with the believer.

In this scenario, sheep, which represent God’s people, have been given access or entrance into the sheepfold. The shepherd protectively confines the sheep in the sheepfold for the night.

A sheepfold was a four-sided walled enclosure where sheep were gathered and sheltered, for a time period or for the night.

Some sheepfolds were rock walls that served as protection from wolves, “thieves, and robbers” (John 10:8 KJV).

The sheepfold, of course, had a GATE, which served as a DOOR or entrance for the sheep to come and go. “…I am THE DOOR: by ME if any man enter in, he shall be SAVED and shall go in and out, and find pasture…” (John 10:9 KJV).

Interestingly, the Shepherd of the sheep, actually, laid at the DOOR or GATE of the sheepfold so if a THIEF or WOLF tried to enter they would have to climb over the shepherd. “…I lay down MY LIFE for the sheep…” (John 10:15 KJV).

For a moment, Jesus steps into the roles of both a shepherd and a gatekeeper. Then JESUS takes gatekeeping/ushering to another level by laying down his life, at the GATE, for the protection of the SHEEP. “…Greater love hath no man than this, than a man lay down his life for his friends (SHEEP)…” (John 15:13 KJV).

At this moment, in scripture, gatekeeping went from simply being a position of a Levitical religious service or an inherited religious right to a sacrificial Christlike ministry. “…David spoke to the chiefs of the Levites to appoint their relatives …Obed-edom and Jeiel, the gatekeepers…” (1 Chronicles 15:16-18 NASB“… a man lay down his life…” (John 15:13 KJV).

Jesus demonstrated the kind of shepherd and gatekeeper he was. Jesus’ example forever revolutionized the ROLE of a gatekeeper or USHER. “…I am the good shepherd: the good shepherd GIVETH his life (lay down at the GATE) for the sheep…” (John 10:11 KJV). “….Christ pleased not himself…” (Romans 15:3 KJV). “…In this world we (ushers) are… [to be]… like Jesus…” (1 John 4:17 NIV).

After spending that time with Jesus, opening the GATE, took on a WHOLE new meaning for gatekeepers and ushers. “…I am the gate for the sheep...” (John 10:1-10 NASB).

After spending quality time with the gatekeeper, Jesus was the FIRST to ENTER the GATE. “…But the one who enters through the gate is the shepherd of the sheep…” (John 10:1-10 NASB).

Thus, Jesus also demonstrates, to the gatekeeper, that “…the shepherd of the sheep…” is “…the one who enters through the gate…” AND “… The gatekeeper  [also]…opens the gate for him…”(John 10:1-10 NASB).

Jesus is the Chief Shepherd, but he calls men to be shepherds too; they are also called pastors or elders. “…Therefore, I exhort the elders among you, as your fellow elder… shepherd the flock of God among you, exercising oversight not under compulsion, but voluntarily, according to the will of God; and not for sordid gain, but with eagerness; nor yet as lording it over those allotted to your charge, but proving to be examples to the flock. And when the Chief Shepherd appears, you will receive the unfading crown of glory. …Peace be to you all who are in Christ…” (1 Peter 5:1-4 NASB).

God ASSIGNS Shepherds to his SHEEP so his sheep can continually HEAR “HIS” voice through them. “…I will give you shepherds after my own heart, who will lead you with knowledge and understanding…” (Jeremiah 3:15 NIV).  “…He gave some …..pastors (shepherds) and teachers…” (Ephesians 4:11 NIV). “…I will set up shepherds over them which shall feed them… saith the LORD…” (Jeremiah 23:4 KJV). “…I will set up one shepherd over them, and he shall feed them, even my servant David; he shall feed them, and he shall be their shepherd…” (Ezekiel 34:23 KJV).

The shepherd/pastor goes into the GATEWAY to minister to the SHEEP and to be a mouthpiece (voice) God’s message. “… The gatekeeper opens the gate for him…” (John 10:1-10 NASB).

The shepherd speaks Gods’ message to the sheep. “…and the sheep recognize his voice and come to him. He calls his own sheep by name and leads them out. After he has gathered his own flock, he walks ahead of them, and they follow him because they know his voice. They won’t follow a stranger; they will run from him because they don’t know his voice…” (John 10:1-10 NASB).

Posted by Dr PENSACOLA H. JEFFERSON at 6:18 AM