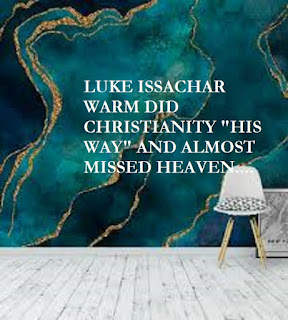 Luke finished the last “new members” class after thirteen weeks. He was officially a member of SON CITY ministries, which was a non-denominational church.

Before long, Luke Warm was headed to Princeton Theological Seminary in Princeton, New Jersey. The Pastor told him he would love Princeton’s theological library and was certain it would help satisfy his hunger for spiritual knowledge.

The whole time Luke Warm attended the seminary 100s of students enrolled year after year. Many of them were candidates for ministry, or an academic career, or some other theological field.

Luke Warm began to understand the teachings of the bible, the Atonement of Jesus Christ, and eternal life with God, the Father in Heaven. He learned them so well he could articulate them to others and prepare them for the blessings of the Christian life.

When Luke Warm returned home to Son City Ministries, four years later, the Pastor gave him a youth bible study class to teach. Luke grew more and more knowledgeable in the spiritual truths. He was even studying Greek and Hebrew.

His years in seminary didn’t just change what he knew about Jesus Christ, but it changed his perspective on religious life and his behavior.

Luke loved the scriptures and he was more than prepared to pass onto others what he’d learned. He loved getting together with the young people, listening to them share their faith, testimonies, and delving into the scriptures.

Luke was grateful for seminary and he believed it had blessed his life with new dreams. He gained a foundation of knowledge that helped others. This knowledge had also made him a part of these happy, advantaged, and successful people without the religious RIGAMAROLE.

Young people were coming to Luke’s bible study in groves and said his class was a safe place to openly discuss God.

The young people began calling him Luke the Duke of the Gospel, but “Brother DUKE” for short. The news spread about Luke’s teachings and bible class grew. The youth began reaching out to other young people and soon Luke’s bible study became a MOVEMENT.

The DUKE MOVEMENT began catching the attention of other churches locally and throughout the US. Luke found himself helping young people know Jesus, grow in their faith, share their faith, and study the scriptures.

By 1987 Luke became a licensed and ordained minister. Luke’s ordination took place in the new SON CITY ministries facility. The DUKE MOVEMENT became nationwide and was bringing in millions of dollars.

The youth were evangelizing by bringing their parents, siblings, friends, and other family members to Son City ministries.

Luke started to travel, but tried to be home for weekly bible studies. He kept up with others churches in order to advise them, see how they were doing, and if they needed help.

Quarterly Luke began to have conferences and follow-up meetings with other youth ministers. They bought Luke’s resources and teaching materials, which were now out on tape or video.

Eventually, as the ministry grew, Luke assigned another youth minister to teach his weekly bible study. He travelled nationally and internationally now. The DUKE MOVEMENT had plenty of volunteers and together they worked and decided on how to continue to MOVE the ministry forward.

Luke and several KEY people took the message of Jesus to young people around the globe. SON CITY ministries begin sponsoring international mission trips for the youth and adults.

Luke I. Warm moved from the DUKE MOVEMENT to full-time evangelism in the early 90s. To disassociation himself with the youth movement he began using his middle name Issachar as his first name and Luke as his middle name.

He was getting older and thought it time for him to move to a different area of ministry. So he decided to take some down time to write some books. He decided to use Issachar L Warm as his pen name.

The change wasn’t too hard for many. The youth continued to call him the DUKE, but others simply called him Minister Warm as usual. He resources, tapes, videos, and books sold millions.

Issachar L Warm felt like he was ready to get married, but had found no bride that had fit the bill. Church folk were always trying to set him up with their own daughters or someone else’s, but none had interest him.

Issachar wanted a special woman who would not only be the “perfect” Christian wife, but one who had a sense of humor, a little adventurous side, who was innovative, and who shared his wanderlust for life.

Not one of the females he’d encountered since Princeton had come close to being his ideal woman. Well, at least, not until he’d met Virtuous. Virtuous lived in a small development on the outskirts of town, near Hades. She was beautiful, petite, and short, but she was funny. Her face looked as though she was always smiling or had a mysteries secret.

Her skin looked as if it had been mixed with the riches and finest caramels and her eyes were twinkling lights of amber. When Issachar first met her, she was so shy she would hardly talk to him.

He was not interested initially and dismissed her as another goody two-shoe, church girl trying to impress him with her piety.

Though he wanted a Christian woman, many were too staunch, too phony, too rehearsed, and most of them lacked virtue. Virtuous, however, was sincerely pure and sweet. She was unexpected and after meeting her at the Farmer’s Market on North Neutral their second conversation peaked his interest.

It was then that Issachar decided she was his perfect woman. She was still shy, but she was humorous and wanted adventure like he did. She listened to and shared his ideals about innovation and travel.

She seemed so fascinated with his ideals and asked so many probing questions about his work, his family, and his personal interests. Their eyes met several times, they smiled at each other, and a special bond was formed in that moment.

Six months later Issachar and Virtuous were married. He was 32 years old. They were happy as they began to bond and connect as husband and wife. They learned what each liked and didn’t like. Virtuous fulfilled Luke’s every fantasy. He thought she was perfect, without faults, and his ideal woman.

Virtuous was beautiful and utterly devoted, which was everything he’d wanted. She would NEVER let him down and he’d NEVER let her down.

Luke SAW her awesome personality, which made him want her and need her more than anything or anyone else. Virtuous would say “...Izzy, I’m not perfect, Luke. I human with flaws like everyone of else. You’ll see. I wander will you still love me then?....”

Luke would say, “...Oh, Virtuous, my love, you’re perfect. There is nothing you can do to change my mind...” Without knowing it, Luke had put Virtuous on a pedestal and truly thought she could do no wrong or make no mistakes.

It was a lot to ask of any human being and Luke was asking her to be his fantasy of perfection, whatever that meant, in his eyes. Even on their honeymoon his young wife felt the BURDEN of his unrealistic expectations of her.

Already Virtuous was feeling deprived of being normal, being herself, or simply being human around Luke.

He praised Virtuous so often it started to become meaningless, even on their honeymoon. It sounded contrived and automatic, because sometimes he’d compliment her when she didn’t deserve it, or it wasn’t justified or earned, or she hadn’t been worthy of it.

Nonetheless, Virtuous initially dismissed her thoughts and berated herself of making a big deal of nothing. Her husband was only trying to love her. She was getting, generously, what other women whined about their men or husbands.

But a year later, Virtuous was still feeling Luke’s praises might be empty, but she didn’t quite know why. In the beginning of their relationship Virtuous bought into all his charm and praise, which made her lose sight of her own humanity.

She wanted to be the woman of her husband’s fantasy, but the growing fear within her heart, knew she couldn’t and she wondered would Izzy (short of Issachar), which she called him, would be gracious to her.

Virtuous got caught up in Issachar’s view of her too and she liked being his perfect woman, but a part of her knew he had unrealistic expectations of her and one day she would NO LONGER be his perfect wife or woman.

Nevertheless, Luke had a deep connection with Virtuous he felt was magical and no one, not even her, could tell him any different. Luke thought it was emotional because she made him “feel” something.

It was this “feeling” that gave him the distorted opinion of her. Virtuous was just a young woman. She was beautiful, inside and outside, but she wasn’t this perfect woman. Luke had put her on a pedestal; end of discussion.

When Virtuous’ father had spoken to Luke before the wedding he’d told him his daughter was not perfect and putting her on a pedestal would be dangerous and harmful to them both one day.

Luke didn’t listen. He told her father about all the positive qualities Virtuous had, which her father already knew, and thought it was good that his future son-in-law knew it too.

However, Luke was in denial about his daughter’s flaws, which meant he didn’t know Virtuous at all. She would be limited, in the marriage, to HIS FANTASY of her ONLY.

Virtuous father SAW how Luke idealized his daughter and it wasn’t because they were newly in love. Not only did Luke admire his daughter’s many virtues, enjoy her company, and was happy he’d found her, but he held her in such high regard he acted as if she wasn’t human too!

Luke was so in AWE of his FANTASY image of his daughter, he was concerned that when Luke discovered Virtuous was only human, he would not have the capacity to show her grace.

Luke accepted ALL of Virtuous positive traits, but had not been challenged by her natural human flaws. Putting Virtuous on a pedestal was NOT GOOD and when she FELL and she would...her father wondered “...what then...”


Posted by Dr PENSACOLA H. JEFFERSON at 9:28 AM